The large majority of romance novels focus on the dating and beginning stages of the couple. Very few explore what happens are the wedding vows. How does a couple find their way back to each other after a tragedy? How do they cope?

The first few times, this book came across my email, I ignored it. It didn’t look like my cuppa tea. I’m not a fan of biker clubs and the real tough guy type of books which I thought this was. I’m glad I took a chance on it. Even though this book is the smack in the middle of a series –Roxie’s siblings and numerous cousins began the series. It can be read as a standalone which is not always the case especially since there are so many books within the series. I figured I would spend the first few chapters playing catch up that focusing on the main characters. Luckily, the focus of the entire book are the two main characters–Roxie and Carter. They have been married for only a few years and have fizzled out. Tragedy struck instead of leaning on each other. They shut the other out until they became a shell of who they were.

Normally, this is the point where I enter into a brief synopsis of the storyline with a favorite aspect of the book. I won’t this time. I won’t because …this book is different. It explores how the couple finds themselves and individuals. It takes them a bit to find it. Carter needed to evaluate his worth and why he never felt “good enough” for Roxie. Roxie felt that Carter only married for one reason and when that reason was gone….what was left? Roxie also had a few more self issues such as comparing herself to her siblings. I mean, anyone who does that will likely feel de-valued. Once a person jumps into that rabbit hole only negativity prevails.

Carter and Roxie needed to learn how to fall in love…not again. But to begin with. Their love story began in a whirlwind. They needed to slow down and appreciate the other. Discover each other, appreciate each other.

This book will move to my re-read shelf.

The Montgomery Ink: Colorado Springs series continues with a couple fighting to keep what they thought they had and gain what they didn’t know they needed.

Roxie Montgomery met her soul mate when she least expected it. When he asked her to marry her, she thought her happily ever after was only just beginning. Then, she found that walking into the sunset was much harder than her favorite books made it out to be. After a crushing loss, she feels as though she doesn’t know her husband anymore, or rather…she doesn’t know herself.

Carter Marshall has loved Roxie since the first time he saw her. But as the days pass between them, so does the distance. He doesn’t know how to show her that he’s all in, and honestly doesn’t know if she’s in at all. When an accident changes everything, they’ll have to decide if what they have can be salvaged, or if starting over is the answer. Or even possible.

Without fighting, without a true new beginning, sometimes, the remnants of what was lost can leave anyone jagged, shells of what they were before. It will take more than the idea of forever for Roxie and Carter to find themselves again, but as the Montgomerys know, nothing worth fighting for is easy.

Get your hands on JAGGED INK now:

Add it to your Goodreads Shelves –> http://bit.ly/2EQadLQ

Carrie Ann Ryan is the New York Times and USA Today bestselling author of contemporary and paranormal romance. Her works include the Montgomery Ink, Redwood Pack, Talon Pack, and Gallagher Brothers series, which have sold over 2.0 million books worldwide. She started writing while in graduate school for her advanced degree in chemistry and hasn’t stopped since. Carrie Ann has written over fifty novels and novellas with more in the works. When she’s not writing about bearded tattooed men or alpha wolves that need to find their mates, she’s reading as much as she can and exploring the world of baking and gourmet cooking. 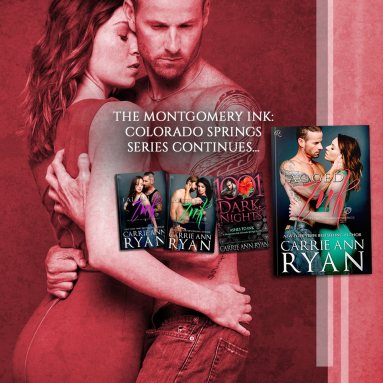